US FTA approves $US 767m funding for New Jersey bridge 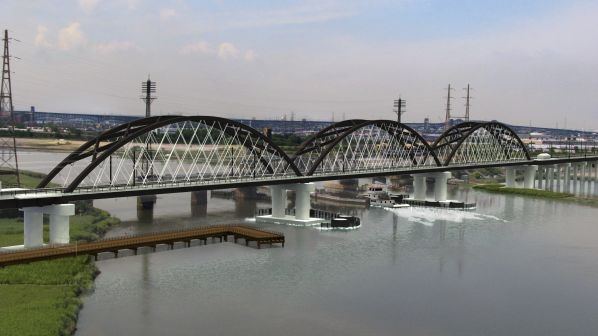 It follows the awarding of an additional $US 55m granted by the FTA to Amtrak for the project on May 26. The project is a collaboration between NJT and infrastructure manager Amtrak and is expected to cost a total of $US 1.8bn.

The proposed 3.9km Portal North Bridge will replace the existing double-track swing-bridge with a new fixed structure. The bridge will include a 366m central span directly over the Hackensack River between Kearny and Secaucus, as well as long approaches on either side. It is part of the wider $US 30bn Gateway infrastructure project, which also includes plans for a new Hudson rail tunnel.

The new bridge is expected to almost double clearance compared with its predecessor to 152.4m, increasing efficiency for both rail and water transport. It is also hoped that the replacement will increase efficiency across the network.

The bridge is part of the USA’s Northeast Corridor (NEC) between Boston and Washington DC. An estimated 300,000 passengers use Amtrak and NJ Transit trains which cross the existing bridge every weekday.

However, the current bridge is a significant point of failure in the system due to frequent mechanical faults in its swing mechanism, seriously disrupting traffic on the line. It is hoped that the new fixed bridge will reduce the NEC’s vulnerability to delays along the line and provide better rail services for passengers.