THE American Public Transportation Association (Apta) says that 10.8 billion journeys were recorded on public transport services, including rail and bus, in the United States in 2014, the highest level in 58 years. 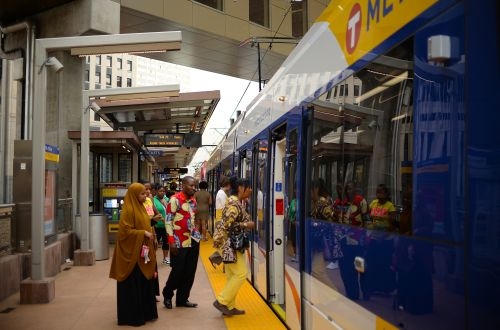 Ridership on light rail, including trolleys and heritage trolleys, increased 3.6% in 2014, with 16 out of 28 public transit systems reporting increases. Minnesota's Twin Cities led the gains with a 57.4% increase which is attributable to the opening of the Metro Green Line linking Minneapolis with destinations in neighbouring St Paul. Four cities also reported double-digit percentage increases: Houston (17.9%); San Diego (15.3%); Denver (12.0%); and Seattle Sound Transit (11.7%). Oceanside, California, also reported a 36% increase during the year after its system was out of service for much of 2013.

Ridership on commuter rail services increased by 2.9% overall, with 22 out of 28 services reporting gains, led by Salt Lake City's Utah Transit Authority, which was up 16.2%. In addition, Stockton, California, (15.7%), Seattle Sound Transit (10.4%), and San Carlos, California, (10.1%), all reported significant gains.

In contrast Apta says bus ridership decreased nationally by 1.1%, although in small and medium size population groups, ridership increased by 2% and 0.5% respectively.

The improvements in performance occurred despite a 42.9% decrease in petrol prices in the fourth quarter of the year.

"People are changing their travel behaviour and want more travel options," Apta president and CEO Mr Michael Melaniphy says. "In the past people had a binary choice; you either took public transit, most likely a bus, or you drove a car. Now there are multiple options with subways, light rail, streetcars, commuter trains, buses, ferries, cars, and shared-use vehicles."

Apta says that from 1995 to 2014, public transit ridership increased by 39%, almost double population growth in the United States, which was up 21%. The estimated growth of vehicle kilometres travelled was 25%. However, Apta says this is an estimated figure because the December results have not yet been posted by the Federal Highway Administration.