CONSTRUCTION started on July 28 on Detroit's 5.3km M-1 Rail light rail line which will run north-south along Woodward Avenue in the city centre. 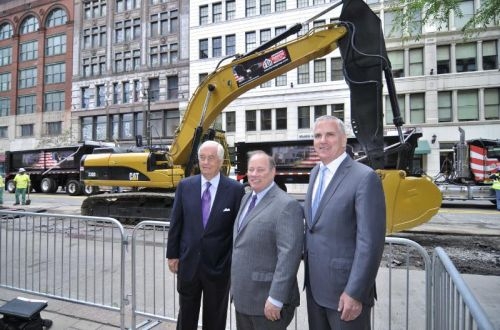 M-1 Rail is a non-profit organisation set up in 2007 to lead the design, construction and future operation of the light rail line which will link Larned Street and West Grand Boulevard and have 20 stations. Mr Roger Penske, chairman of M-1 Rail, and its president and CEO Mr Matt Cullen, visited the construction site together with Detroit's mayor Mr Mike Duggan (pictured).

The line, which is due to open in late 2016, will serve Detroit's largest job centres and most-visited destinations including the city's business, educational, medical, cultural and entertainment hubs. Traffic is forecast at between 5000 and 8000 passengers per day. The project is expected to lead to the construction of 10,000 new houses and generate more than $US 3bn in economic development.