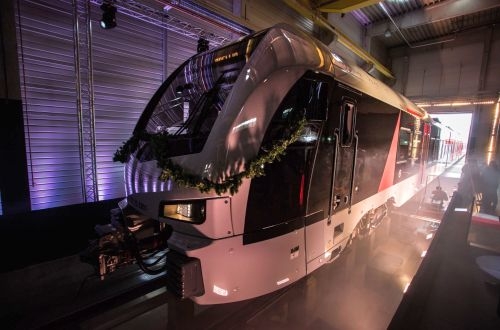 The 160km/h trains will be introduced on RE 19 and RB 35 Düsseldorf - Wesel - Emmerich services when the 2017 timetable begins on December 11. Abellio says it expects to obtain certification for the operation of the trains on the Dutch network by mid-2017, which will enable the extension of RE 19 services across the border to Arnhem.

Abellio required trains equipped for 25kV ac operation due to the conversion of the line from Emmerich, Germany, to Zevenaar, Netherlands, from 1.5kV dc as part of the extension of the Betuweroute freight line. The trains used for cross-border services will be equipped with ETCS Level 2 in addition to the Dutch ATB and German PZB systems.

The 90.8m-long single-system trains seat 259 passengers, 32 of them in first class, while the multi-system variant seats 251, including 24 in first class. Both types have 43 folding seats and accommodate up to 236 standing passengers. One of the two toilets meets Passengers with Reduced Mobility (PRM) standards and each train accommodates 15 bicycles.

Upon delivery, Abellio will transfer ownership of the trains to VRR, which will lease the fleet back to the operator.