ALSTOM has starting dynamic testing at the Velim test track in the Czech Republic of the first Coradia Polyvalent bi-mode - diesel and 25kV electric - trains for Algerian State Railways (SNTF). 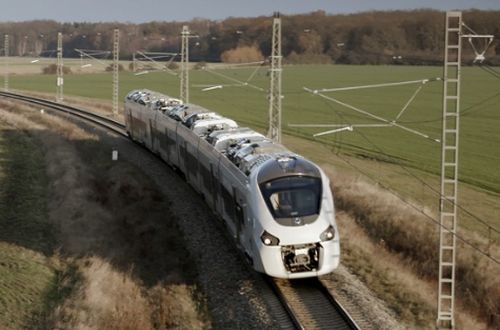 The Alstom Coradia train for Algeria on test at Velim

During the tests, which will last for two and half months, the Coradia train will cover more than 30,000km, representing about 400 hours of dynamic testing. The tests will cover traction, braking, safety and acoustics. The test programme is being managed by a team of 14 Alstom engineers and technicians, six of whom will be based permanently at Velim.

The train has already undergone a variety of static tests, including sand tests. Air-conditioning tests were carried out in Alstom’s climate chamber in La Rochelle to check its resistance to temperatures of up to 55°C as well as for equipment exposed to the sun and extreme heat.

When the testing has been completed at Velim, the train will be transferred to the French test site at Bar-le-Duc where it will be used to train SNTF drivers.

Alstom’s Reichshoffen plant is building 17 of the six-car trains under a €200m contract awarded in July 2015.