LEASING company Alpha Trains has signed a contract worth nearly €250m with Stadler Pankow to supply a fleet of 28 emus for German regional operator WestfalenBahn. 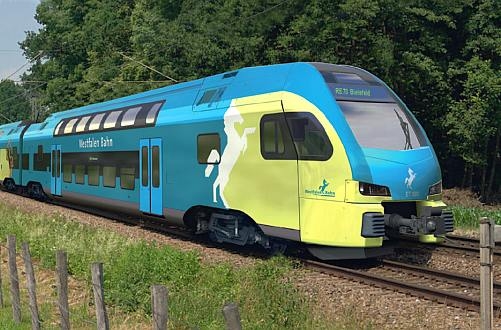 The order comprises 15 four-car single-deck Flirt emus to operate RE 15 services from Münster to Rheine and Emden, and 13 six-car Kiss double-deck trains, which will be used on RE 60 (Rheine – Osnabrück – Hannover – Braunschweig) and RE 70 (Bielefeld – Herford – Hannover – Braunschweig) services. The single-deck trains will seat up to 430 passengers, 30 of them in 1st class, while the double-deck sets will accommodate 626 passengers including 34 in 1st class.

WestfalenBahn was awarded contracts by Lower Saxony Transport Authority (LNVG) and its partners last year to operate the Emsland and Mitteland regional express for 15 years from December 2015. The introduction of new trains will support service enhancements, including the introduction of regular-interval hourly services between Meppen and Rheine, the busiest section of the Münster – Emden route.

The first operator of the Kiss emu in Germany is East German Railway Company (ODEG), and these now operate all services on regional express route RE4 (Stendal – Rathenow – Berlin – Jüterbog).