The first trains are expected to enter service by the end of the year. 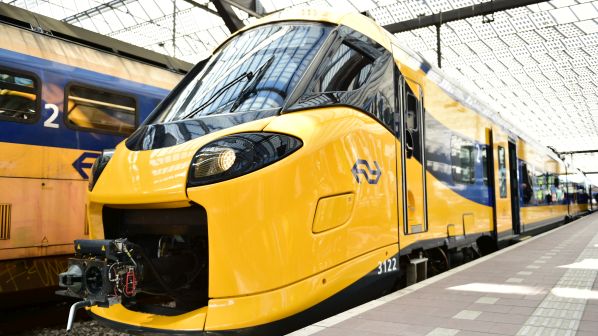 One of the new NS Coradia Stream trains built by Alstom.

NETHERLANDS Railways (NS) and Alstom revealed the new Intercity Next Generation (ICNG) trains to the Dutch public at Rotterdam Central Station over the weekend of July 2-3.

Alstom is supplying NS with 79 Coradia Stream EMUs for domestic services comprising 49 five-section and 20 eight-section sets that can reach a maximum speed of 200km/h.

The train displayed in Rotterdam is close to securing an Authorisation to Place on the Market (Apom) from the Dutch national rail safety authority, while the Apom for the 20 additional eight-car ICNG sets, which will operate Amsterdam – Brussels services, will be granted by the European Union Agency for Railways. Provided the Apom is secured, NS plans to introduce first ICNG domestic trains in December 2022.

The trains will operate at 160km/h initially on the HSL South high-speed line in combination with Bombardier-built class 186 Traxx MS2 locomotives which haul 40-year-old ICRm coaches. Operation will increase to 200km/h once the complete ICNG fleet has been introduced. The maximum line speed of HSL South is 300 km/h.

ICNG was originally scheduled to enter commercial operation in December 2020. However, various circumstances, such as the Covid19- pandemic, the Ukraine war, but also changes in the strategy in the process of vehicle authorisation and problems with software, have caused a delay in delivery and entry into service.

The trains are described as spacious and well-lit and have dedicated areas for wheelchairs and bicycles, as well as being equipped with toilet facilities designed for people with reduced mobility. Air-conditioning, Wi-Fi, numerous charging points for mobile phones and laptops, as well as LED reading lamps, also contribute to the features designed to enhance passengers’ travel experience.

The ICNG trains are equipped with ERTMS and regenerative braking. This can save as much as 35% of a train’s energy consumption, while also reducing wear on the wheels. In addition, thanks to improved aero-acoustic design, the use of components with reduced noise emission and bogies with pneumatic suspension, the ICNG train also has features helping to reduce interior and exterior noise.

ICNG is the new backbone of the NS long-distance rolling stock fleet and their introduction will prompt a restructuring of the Dutch inter-city network. For example, a new IC service will be established between Breda and Groningen via HSL South, with calls in Rotterdam, Schiphol, Amsterdam South, Almere and Zwolle. The trains will initially enter operate between Amsterdam Central, Rotterdam Central and Breda, followed on services from The Hague Central to Rotterdam Central, Breda and Eindhoven.