ONE of the first Alstom Metropolis driverless metro trains for Riyadh Metro was presented to representatives of Arriyadh Development Authority and the international media at Alstom's plant in Katowice on February 7. 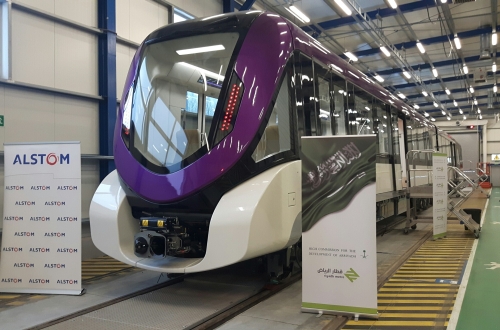 Alstom is a member of the Fast consortium, which is constructing lines 4, 5 and 6. The three lines have a total length of 64.5km and include 29 stations, 30km of viaduct and two depots.

Production is underway on trains for all three lines and five sets have been completed so far. The first train left Katowice in January and is being shipped to Saudi Arabia via the port of Hamburg. Two trains are undergoing dynamic testing in France and a fourth train has been sent to the Rail Tec Arsenal climatic test chamber in Vienna.

When production is fully underway up to five trains per month will roll off the assembly line at Katowice.

According to ADA, construction of the 176km six-line network is now 48% complete, with the project on budget and on schedule for completion in early 2019.

For a detailed breakdown of fleet orders and new rail projects around the world, subscribe to IRJ Pro.