SWISS Federal Railways (SBB) has awarded Alstom a SFr 80m ($US 82m) contract to upgrade seven of its earlier ETR610/RaBe 503 Pendolino tilting EMUs to the same interior and technical standards as the latest trains in the fleet. 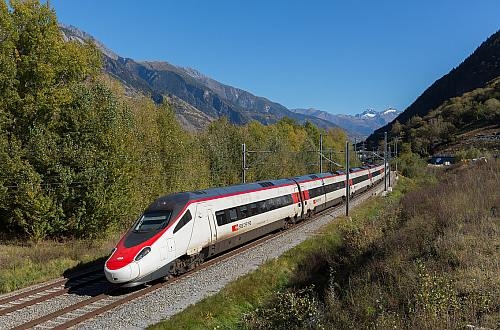 The Cisalpino joint venture between SBB and Trenitalia ordered 14 of the seven-car multi-system trains from Alstom in 2004 for international services between Switzerland and Italy, but the fleet was divided between the two operators when Cisalpino was disbanded in 2009, with seven sets going to SBB and seven to Trenitalia.

SBB subsequently ordered a second batch of eight ETR610s in July 2012 and exercised an option for four more trains in February this year, which will be delivered in time for the opening of the Gotthard Base Tunnel in December 2016.

The initial batch of trains will be equipped with larger luggage racks, a new family area, new toilets, and passenger Wi-Fi. The trains will also be equipped with a rear-facing camera system and a fire suppression system, which will meet the latest Italian safety standards.

The work will be carried out at Alstom's Savigliano plant in northern Italy between 2017 and 2020. SBB says the upgrading must be carried out by the original manufacturer of the trains for contractual reasons.