ATHENS Metro has awarded a $US 1.8bn contract for the construction of the first phase of its 38.2km Line 4 metro project to an Avax-led consortium, which also includes Alstom and Ghella. 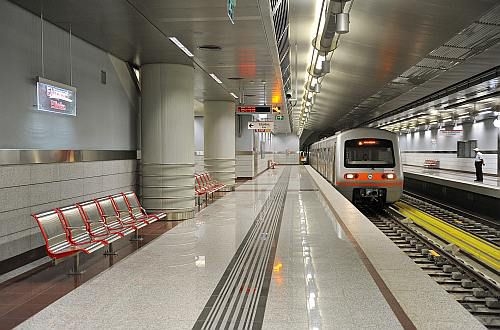 The contract covers the construction of the 12.8km Section A, which runs from Alsos Veikou via the city centre to Goudi, with 15 stations including interchanges with lines 2 and 3.

The work, which is scheduled to begin in 2022, will include the construction of around 10.3km of twin-track tunnel, primarily excavated using tunnel-boring machines (TBM). The sequential excavation method (SEM) will be used to excavate 850m of single-track tunnel around Akademia and Evangelismos stations due to the historical significance of the areas.

Alstom will supply 20 four-car 750V dc Metropolis trains fitted with the Hesop regenerative braking system, security and control systems, and CBTC, which will facilitate operation at Grade of Automation 4 (GoA4).

Line 4, which will have a total of 35 stations when complete, is comprised of five phases, including:

The line was originally approved for construction in September 2014. However, work was delayed due to repeated alterations to the route, including the recent addition of a new station at Ano Kypseli.

“This is undoubtedly a landmark project, not only in terms of upgrading the quality of life and commuting for the capital city’s residents, but also for the key role that infrastructure projects can play in Greece’s course towards economic growth,” says Mr Konstantinos Mitzalis, managing director of Avax.

The contract for Line 4 is the Avax-Ghella-Alstom's consortium's second ongoing project in the Greek capital. The group is also constructing the six station Line 3 extension between Haidari-Athens and Piraeus, which is scheduled for completion in 2022. The first phase between Aghia Marina to Nikaia opened on July 10.