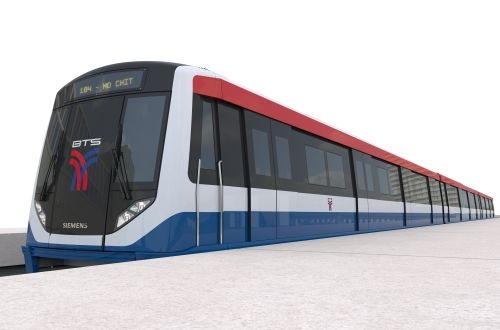 Artist's impression of the Siemens Inspiro trains for BTS.

Siemens, which will build its trains in a consortium with Bozankaya, Turkey, will also be responsible for maintaining the fleet for 16 years. Delivery is scheduled to start in 2018.

The two train fleets will be deployed as follows:

All trains will be supplied with on-board signalling and radio systems.

Siemens supplied 35 three-car trains for the opening of the initial phase of the two-line Skytrain network in 1999, which were subsequently lengthened to four-car sets in 2012-13. CNR Changchun (now part of CRRC) supplied 17 four-car trains in two batches between 2010 and 2013.

"With these new trains will be able to operate Skytrain comfortably for the next 10 years," Mr Keeree Kanjanapas, chairman of BTS Group, says.