AUSTRIAN Federal Railways (ÖBB) is set to order 25 additional Talent 3 EMUs from Bombardier after concluding a new public service obligation contract with the Austrian Transport Ministry and the province of Tyrol for the operation of regional services in the west of the country. 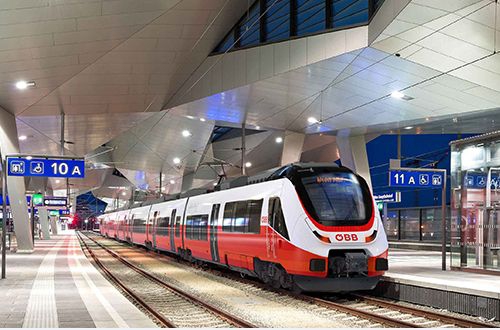 The operating contract, which is worth around €700m, runs for 10 years from December 2019 and covers the operation of around 7.1 million train-km per year. The agreement includes an hourly cross-border Innsbruck – Brenner – Bozen – Meran – Mals service, which will be operated by SAD Local Transport class 170 EMUs and the new ÖBB trains.

The additional trains will be procured through a framework contract for up to 300 Talent 3 sets, which was signed by ÖBB and Bombardier at the end of last year.

The extra sets for Tyrol will be 100m long with fewer passenger doors than the trains already ordered for the neighbouring province of Vorarlberg. The order will include six multisystem trains for operation in Italy.

For detailed data on rolling stock orders around the globe subscribe to IRJ Pro.