ARRIVA Netherlands has signed a contract with Stadler for 18 Wink electro-diesel multiple units, which will initially operate on biodiesel on non-electrified lines, with provision for conversion to battery and 1.5kV dc overhead electric operation. 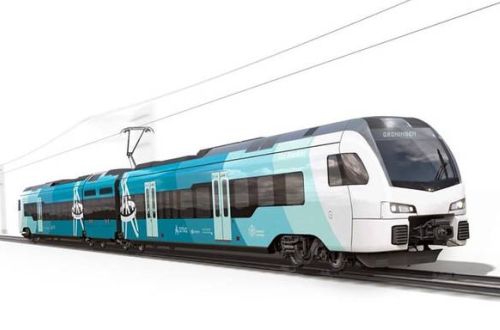 The contract was signed on November 9 at a climate conference held in the city of Groningen by the provinces of Drenthe, Groningen and Friesland.

The 55.5m-long two-car trains are being procured as part of a new 15-year concession for the operation of regional services in Groningen and Friesland, which begins in 2020.

The new trains will be equipped with engines designed to use hydrogenated vegetable oil (HVO) and the contract includes an option to convert the fleet to electric power with batteries for operation on non-electrified routes.

Arriva has made provision for future battery operation to take full advantage of future electrification in the region. Currently most of the lines in the concession area are unelectrified, but Arriva has urged the Dutch government, regional authorities and infrastructure manager Prorail to press ahead with electrification.

Arriva hopes the Leeuwarden - Groningen line will be entirely electrified in 2025. However, with the availability of battery trains, a more limited form of electrification may be an option on some routes, with catenary at stations to enable charging during stops.

In addition to the contract for new trains, Stadler will modernise Arriva Netherlands’ existing fleet of 51 GTW DMUs. These trains will be adapted for biodiesel operation and fitted with completely new interiors.

The concession agreement requires the operator to improve the sustainability and comfort of its rolling stock and increase the number of stations served by the network.

In 2018 the province of Friesland plans to test Alstom’s Coradia iLint hydrogen fuel-cell multiple unit, coinciding with the Leeuwarden-Friesland European Capital of Culture.