Bombardier and Bozankaya to bid for Turkish HS train order

BOMBARDIER has signed a memorandum of understanding (MoU) with Bozankaya, a Turkish LRV car body manufacturer, to bid for Turkish State Railways' (TCDD) forthcoming tender for 80 high-speed trains, which is expected to be published shortly. 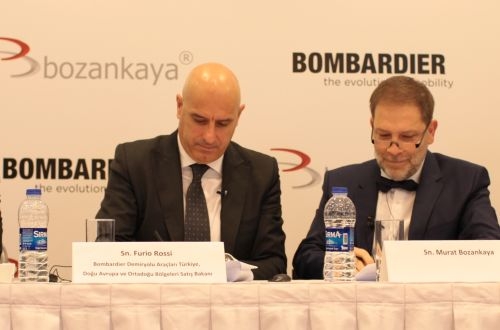 Should the partnership be successful in winning the contract, Bombardier will invest around $US 100m to set up a new production facility in Turkey and transfer technology to Bozankaya. The MoU was signed in Ankara by Mr Murat Bozankaya, CEO of Bozankaya, and Mr Furio Rossi, Bombardier's managing director, Turkey.

TCDD is expanding its high-speed rail network and will require a large number of trains up to 2025. "Turkey has stated it will invest over $US 45bn for rail products and infrastructure," Rossi says. "We are pleased to have found a strategic partner in Bozankaya." Rossi says the partnership will combine Bombardier's engineering know-how and transfer of technology, with Bozankaya's expertise in manufacturing vehicles both locally and internationally.

Bozankaya was set up in Germany 1989 as a research and development company, and has since moved into bus and stainless steel and aluminium light rail vehicle production with factories in Germany and Ankara.

Bozankaya will deliver its first 100% low-floor tram to the Metropolitan Municipality of Kayseri this year. The company has also completed a project supported by the Scientific and Technological Research Council of Turkey (Tübitak) to design a bogie and has manufactured car bodies for domestically-produced LRVs for Istanbul Ulasim. Bozankaya is carrying out R&D and prototype studies for the first Turkish metro car.