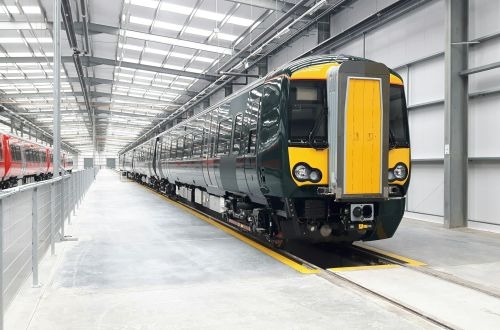 The first class 387 EMU for GWR on display at the opening of the facility on May 13.

The 10,000m2 facility is the centrepiece of a £20m investment in the plant, which is being upgraded to expand capacity for future orders and the fleet of 66 class 345 Aventra EMUs for London's Elizabeth Line (Crossrail).

The testing and commissioning facility is equipped with 250m-long electrified tracks, which are long enough to accommodate a complete nine-car class 345 set. Production of the class 345s will peak next year, when Bombardier will deliver a train to Transport for London every 10 days. To meet this demanding schedule, additional testing facilities were needed at Derby and Balfour Beatty was awarded a contract in 2014 to build a new testing shed, which is known as 'V' Shop.

All four lines in the shed are electrified with full-length pits for underfloor access. Each test bay is multifunctional and can be used for type testing or final acceptance testing.

"This facility is one of the biggest investments in the history of our Derby site, and the test facility will be a fundamental part of both our current projects and future train builds, enhancing our ability to deliver all stages of a new train product from a single British site."

Bombardier UK head of technical services Mr Ken Wilson told IRJ that engineering testing of the first class 345 would begin at Derby at the end of this month, before the train moves to the Old Dalby test track near Nottingham for dynamic testing.

As part of the upgrading of its testing facilities, Bombardier is also extending electrification on the site's test track from 1km to 1.5km with a new 6MVa transformer to provide the necessary power for a nine-car class 345. As Crossrail production peaks, Wilson says it will be possible to operate the test track 24 hours a day to meet the delivery schedule for the fleet.

In addition to the class 345s, Bombardier says production will begin later this year on an order for 45 class 710 Aventra EMUs for London Overground. The first of these trains will enter service in May 2018.