BOMBARDIER Transportation opened its new final-assembly hall in Bautzen, Germany, on June 15 after investing €30m in the site. 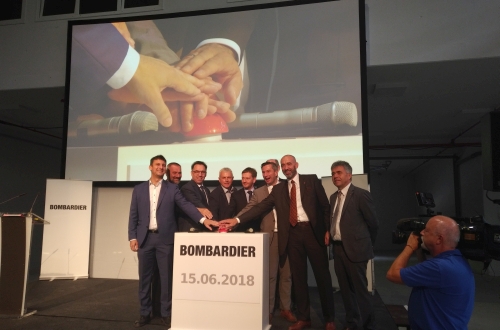 Bombardier Transportation and guests celebrate the opening of the new assembly hall in Bautzen.

The new hall can produce up to 600 cars per-year ranging from regional and inter-city trains to suburban and metro trains, and trams. Three different vehicle types can be produced simultaneously and Bombardier says the new hall can save around €1m per year in terms of logistics, energy and maintenance costs.

The manufacturer says around 500 employees will work within a total 8100m2 of factory floor space. Around 5000m3 of concrete and 1300 tonnes of steel were used in the new building, in which Bombardier invested around €8m, with around 24km of electrical cables laid and 568 lighting fixtures installed.

“The investment will secure 1000 jobs here at Bombardier, and many more for the suppliers in the region,” says Saxony’s prime minister, Mr Michael Kretschmer.