Bombardier pushes ahead with German restructuring

BOMBARDIER has reached an agreement with its trade unions in Germany over the proposed restructuring of the company's activities, with no factory closures planned, although the role of several will change. 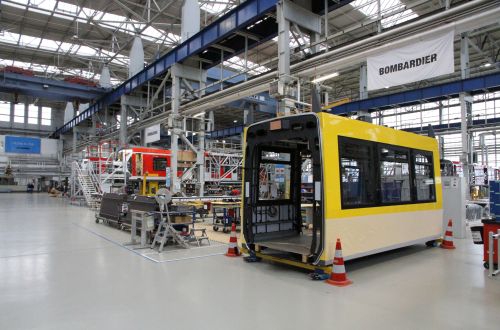 Bombardier announced plans last year to reduce its 8500-strong German workforce by 2200, with 700 currently on temporary contracts and the remainder permanent employees. Bombardier says the plan will return the German rail manufacturing part of its business to profitability after 2020 after making losses since 2011.

Bombardier will announce plans for redundancies on a site-by-site basis from next week but no redundancies are planned to take effect before December 2019.

Bombardier hopes voluntary redundancies will cover the cuts, although it is unclear if there will be sufficient volunteers at the plants most likely to be affected such as Hennigsdorf near Berlin which is set to lose around 400-500 staff or half of production workforce. Bombardier has already reduced employee numbers in Germany by 1430 during 2017 largely by not renewing temporary contracts and restructuring some management roles.

Bombardier will also invest in several factories to make them more specialised.

For example, Hennigsdorf will become Bombardier's global development centre for metro trains and some work currently conducted here will transfer to Bautzen, the main German plant producing LRVs, which will benefit from a €30m investment. The railway coach/car body plant at Görlitz will become the main German car body assembly plant and benefit from an €8m investment although 800 jobs are likely to be lost here.