THE first class 345 Aventra commuter EMU for London’s east-west Crossrail link was unveiled to the press by Bombardier and Transport for London (TfL) at Bombardier’s Derby plant on July 29. 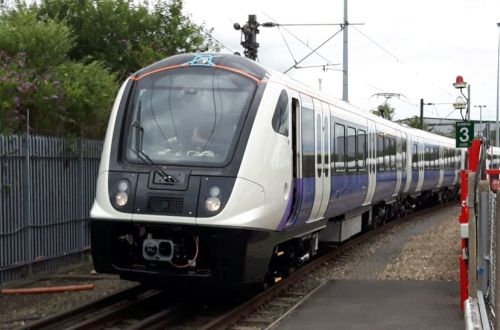 TfL and Britain’s Department for Transport (DfT) selected Bombardier in February 2014 for a £1bn contract to supply 66 nine-car 25kV 50Hz trains, with an option for 18 more. Each 200m-long nine-car train will accommodate around 1500 passengers, 450 of them seated, with a combination of longitudinal and 2+2 transverse seating reflecting the mixture of “metro”, commuter and airport journeys Crossrail will be used for.

The air-conditioned trains are equipped with full-width gangways, CCTV and passenger Wi-Fi. Each train will have four dedicated wheelchair spaces and multi-functional areas to accommodate pushchairs and luggage.

The first train is due to be moved from Derby to the Old Dalby test track south of Nottingham next month. Delivery of the first train to the London area is scheduled for November. There will then be a period of compatibility testing and mileage accumulation on the Great Eastern Main Line (GEML). Driver training will begin in April 2017 and the first trains will enter service with TfL Rail between London Liverpool Street and Shenfield in May 2017.

The trains will use the British TPWS and AWS train protection systems on the GEML, with CBTC in the core tunnels and ETCS on the Great Western Main Line from London Paddington to Heathrow Airport and Reading. Testing of operation under CBTC will begin at Old Dalby before the end of this year and ETCS testing will start in early-2017.

Mid-2018 will also see the start of dynamic testing in the core Crossrail tunnels beneath central London.

The first section of Crossrail will open between Paddington and Abbey Wood in December 2018. The Shenfield line will be connected to the Crossrail tunnels in May 2019 and the full route from Shenfield and Abbey Wood in the east to Heathrow and Reading in the west will be operational by December 2019. All of the seven-car trains will be lengthened to nine cars by the end of 2019.

The trains will be maintained by Bombardier at Old Oak Common under a 32-year fleet servicing contract.