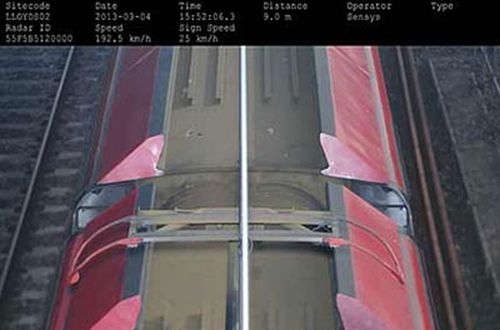 PanMon is intended to replace NR's Panchex system, which dates from the 1980s and is nearing the end of its useful life, and was subjected to a two-year test programme at Cheddington south of Milton Keynes. Ricardo says the system proved it was capable of providing continuous and accurate measurements of pantograph uplift forces and defects, including chips, damaged end-horns, and worn carbon contact strips on trains passing at speeds of up to 200km/h, meeting NR's technical and performance criteria.

PanMon is based on two key sub-systems. The Automatic Pantograph Monitoring System (APMS) developed by Sensys, Sweden, to generate high-definition images of passing pantographs, using a combination of radar, laser, video, and photo technology. This is supported by a new contactless optical uplift monitoring system developed by Ricardo Rail and DMA, Italy.

PanMon uses pattern recognition analysis software to automatically interpret data and provide condition reports for each passing pantograph. The technology monitors a range of parameters including carbon strip thickness and the condition of the pantograph head, aerofoils, or end horns.

For the Cheddington trial, which began in March 2013, NR specified that the system must be able to measure at least 90% of passing traffic and capture measurements of carbon thickness to within 2mm. The system also needed to offer accurate measurements of uplift forces; consistently detect chips and defects larger than 25% of the carbon surface width; identify each passing vehicle; and record local weather conditions.

The system will now be rolled out nationally, starting with four installations on the WCML.