THE winner of the 15-year Wales & borders franchisee, KeolisAmey, which takes over in October, has named CAF and Vivarail as preferred bidders for contracts to supply new trains. 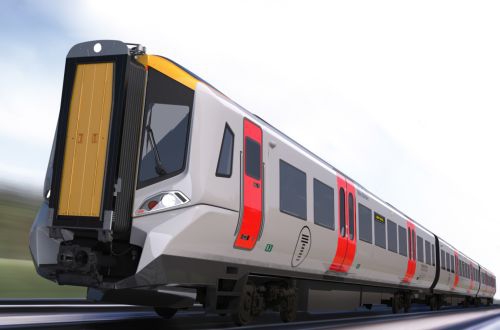 Artist's impression of one of the new CAF DMUs for KeolisAmey.

CAF will supply and maintain 44 two-car and 26 three-car DMUs which will enter in service by September 2022 and another seven two-car units to be delivered by September 2024.

The CAF DMUs will be based on its UK Civity design and will be built at the company’s new factory in Newport, Wales, which is due to be completed in the autumn.

Vivarail, Britain, will supply five three-car class 230 battery-diesel hybrid multiple units, which will be converted from former London Underground District Line EMUs. The trains will be fitted with air-conditioning, Wi-Fi, USB ports, power sockets, and universal-access toilets. There will also be space for bicycles and luggage.

The trains will be ready for testing and commissioning in early 2019 prior to their introduction later in 2019 on three routes: Wrexham - Bidston, Llandudno - Blaenau Ffestiniog, and Chester - Crewe.

“We are proud to be supplying the first of the new trains for Wales,” says Vivarail’s CEO Mr Adrian Shooter. “In conjunction with our partners at Creactive we have worked on a livery design that will be seen across the whole fleet.”