PRODUCTION of the first of 66 bodyshells for the new fleet of Mk 5A locomotive-hauled coaches for British train operator TransPennine Express (TPE) began at CAF’s plant at Bessain in northern Spain on October 27. 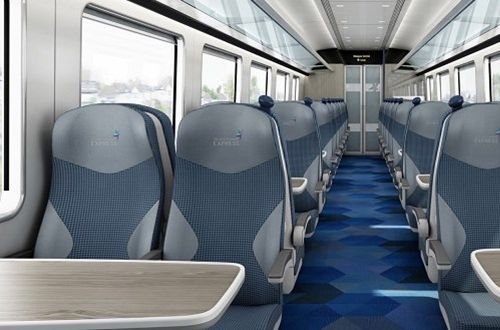 The vehicles will be formed into 13-five car push-pull sets, each seating 287 passengers. Traction will be provided by class 68 locomotives leased to TPE by Direct Rail Services. Both the locomotives and coaches will be owned by Beacon Rail Leasing.

These trains will be delivered in 2018 and will initially be deployed on the Liverpool - Manchester - Leeds - Newcastle route replacing three-car class 185 DMUs. However, with the delivery of 19 five-car Hitachi class 802 bi-mode trains for this route in 2019, the locomotive-hauled sets will be redeployed on Liverpool - Scarborough and Manchester Airport - Middlesbrough services.

The Mk 5As will be equipped with an electronic reservation system, passenger Wi-Fi, power sockets at every seat, a real-time passenger information system and an onboard media server, which will enable passengers to stream television programmes and films.

In addition to the Mk5s and class 802s, CAF will supply TPE with 12 class 397 Civity UK EMUs for Manchester/Liverpool - Glasgow/Edinburgh services. All of the new trains are due to enter service by 2020.