CAF Civity EMU for TransPennine Express on test at Velim

DYNAMIC testing of the first CAF class 397 ‘Nova 2’ EMU for British train operator TransPennine Express (TPE) began on the inner circuit at the VUZ Veilm test centre in the Czech Republic on the afternoon of July 3. 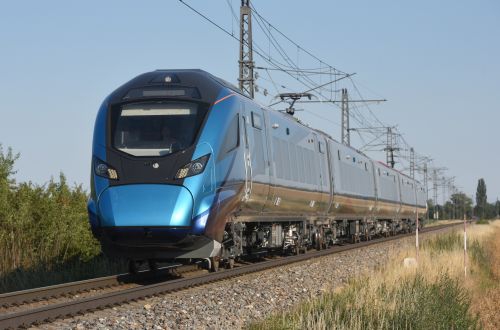 The train, which is based on CAF’s Civity platform, reached 200km/h later in the day during testing on the outer circuit.

Due to enter service early next year, the fleet of 12 class 397s will replace TPE’s 177km/h Siemens class 350/4 EMUs on the Manchester/Liverpool - Glasgow/Edinburgh route.

Each five-car class 397 set will seat 286 passengers including 264 in standard class and 22 in first and each train is equipped with four toilets, one of which meets the requirements of the Technical Specification for Interoperability for passengers with reduced Mobility (TSI-PRM). There will also be storage for four bicycles, an electronic seat reservation system and a real-time passenger information system.

FirstGroup subsidiary TPE has ordered three fleets to improve services and increase capacity on its network in northern England and southern Scotland. Earlier this month the first of 19 bi-mode class 802 trains (Nova 1) arrived in Britain from Japan.Testing of CAF Mk 5A locomotive-hauled coaches for TPE (Nova 3) continues at Velim and two sets have been delivered to Britain. CAF is supplying 13 five-car Nova 3 sets, which will operate in push-pull mode with Vossloh/Stadler Rail Valencia class 68 locomotives sub-leased from Direct Rail Services.