THE first class 331 Civity EMU for Arriva Trains Northern was presented to media and stakeholders at CAFs Zaragoza plant on January 31. 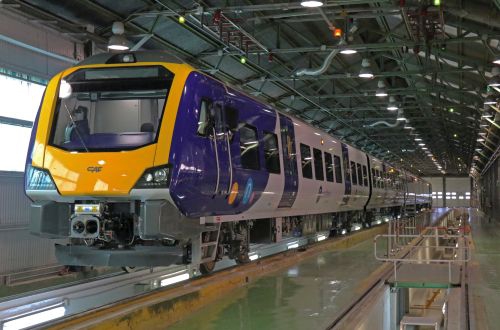 Northern placed a £492m order in January 2016 for 31 three-car and 12 four-car EMUs (class 331) together with 25 two-car and 30 three-car DMUs (class 195). Financing for the order is being provided by Eversholt Rail and there are options for additional vehicles, although the details have not been disclosed.

Bodyshells for both the EMUs and DMUs are being manufactured in Zaragoza, with final assembly of the DMUs taking place at CAF’s facility in Irun.

Dynamic testing of the first class 331 will take place later this year, initially at Velim in the Czech Republic between March and June. Testing on the British network will begin in August with the aim of achieving approval for passenger use by late 2018.

Northern plans to introduce the trains on its busiest routes serving Manchester from early 2019. The EMUs will be based at Allerton depot near Liverpool and used on services from Manchester Airport to Preston and Blackpool North.

Each three-car Class 331 EMU set is formed of two driving motor vehicles, which are equipped with traction converters and asynchronous traction motors supplied by Austrian manufacturer TSA, and an unpowered intermediate car which is fitted with a transformer and pantograph.

The four-car variant includes an unpowered trailer vehicle and the trains can be extended to five cars if required.

CAF also provided an update on the Class 195 DMUs being built for Northern. The trains are equipped with MTU power packs incorporating 390kW Daimler engines and hydraulic-mechanical transmissions supplied by ZF.

Both new fleets are designed for 160km/h operation and are equipped with Dellner auto couplers. They also feature pre-installed ERTMS equipment from CAF Signalling.