GERMAN Rail (DB) has presented the first of 48 class 422 EMU which it is refurbishing for Rhine-Ruhr Transport Association (VRR) at its Krefeld works. 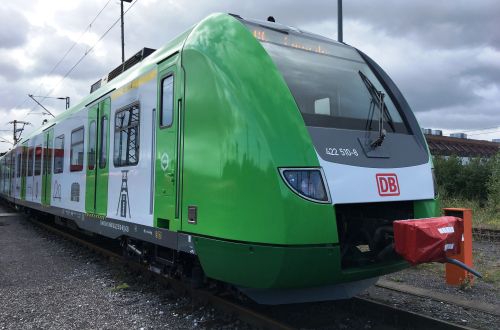 VRR agreed to purchase the fleet of trains, which were built by Alstom between 2007 and 2010, from DB as part of its plans to boost competition in the region. The sale is set to be completed in 2019 when Keolis deploys the trains and commences 15-year operating contracts for S-Bahn line S1 (Solingen - Dortmund) and S4 (Unna - Dortmund - Lütgendortmund). In addition, DB secured the contract to maintain the fleet at its Essen depot, also up to 2034.

The refurbished trains have a green livery on the cab and doors, and silver on the bodyside which features silhouettes of famous buildings from the Ruhr area. The interior has been refreshed, with DB’s blue seats replaced with those of various colours. The trains will also incorporate an automatic passenger counting system.

The refurbishment work is taking around six weeks for each four-car train, with three trains set to undergo work simultaneously.