BOMBARDIER has delivered the last of 16 class 442 Talent 2 EMUs to DB Regio for the Gäu-Murr regional network in Baden-Württemberg. 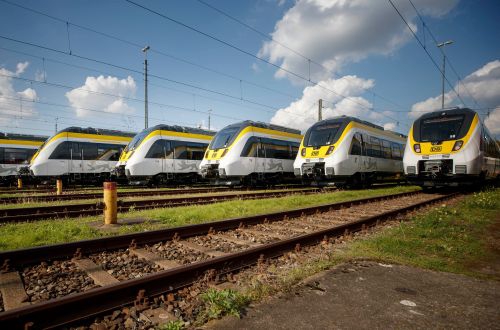 The trains were assembled at Bombardier’s Henningsdorf plant and deliveries began in July. The fleet will enter service in December on the Stuttgart - Schwäbisch Hall Hessental - Crailsheim and Stuttgart - Horb - Singen/Freudenstadt routes.

DB Regio was awarded a contract in February 2016 to operate 2.1 train-km per year on the two lines.

Class 425 EMUs are currently being used pending the introduction of the new trains.

Each new four-car train will seat 215 passengers and accommodate up to 30 bicycles.

The trains are owned by the state of Baden-Württemberg, which is leasing the fleet back to DB Regio. State transport minister Dr Winfried Hermann says that since March 2015 the so-called Baden-Württemberg model has been adopted for all eight regional rail procurements requiring new rolling stock. “This response shows that we have found the most favourable form of financing with the path we have taken,” says Hermann.