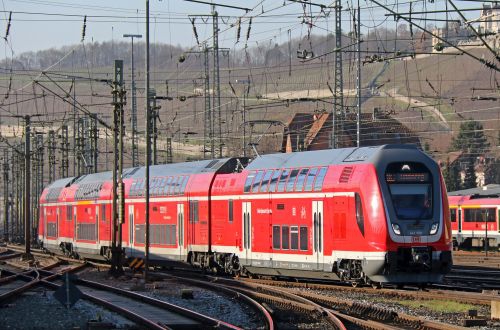 Delivery of these trains had been delayed by up to three years due to ongoing safety approval issues. The first of the trains to enter service was in the northern state of Schleswig-Holstein on September 27 2017 between Kiel and Neumünster, initially operating as a three-car passenger carrying test train. Since the first week of December the new units have entered widespread service not only on the Hamburg - Kiel route but also between Frankfurt and Würzburg/Bamberg.

In all cases the new trains were delivered late and replace locomotive-operated push-pull trains.

DB Regio has ordered powered Twindexx driving vehicles, which are being formed into EMUs using modern Twindexx coaches already in service plus others built more recently.

Originally due in service in December 2014, 32 class 445 power cars have been delivered to Kiel to form 16 EMUs. As the intermediate vehicles needed no additional safety approval, they had already been used in service in locomotive-operated sets since 2015; this had also occurred on routes from Frankfurt.

Some, but not all, of those ordered for the Main Neckar Ried network entered service on schedule, from December 10 on the Frankfurt - Heidelberg line. However, as not all 24 trains have been delivered, DB Regio has announced a phased introduction for the remaining trains during 2018 with Frankfurt - Mannheim services going over to the new EMUs from April onwards.