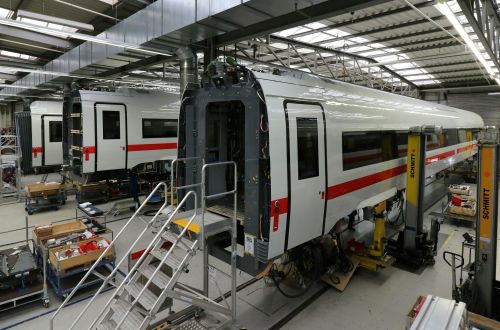 In 2013, it was announced that the 10-car trains would be delivered as 12-car trains with 170 extra vehicles added to the order. At the same time plans to order multi-voltage trains able to operate under any voltage other than 15kV 16.7Hz were dropped.

Two additional driving cars will also be delivered to act as spares in the event of damage to vehicles in the main fleet. DB will continue to have options under the original contract to order up to 170 more trains until 2030.

Siemens is the lead contractor for the ICE 4 project but has sub-contracted substantial construction work to Bombardier which is building all the car bodies at its factories in Wroclaw, Poland, and Görlitz, Germany. Siemens is undertaking final assembly of all powered vehicles for these distributed power EMUs at its plant in Krefeld while Bombardier is completing all unpowered trailer and driving cars at Hennigsdorf near Berlin.

Siemens assembles the completed trains and undertakes all systems integration and final testing at its Wildenrath test facility.

The first two class 412 trains have been in service with DB Long Distance between Hamburg and Munich since late 2016. Currently five more completed trains are on test. Testing is also being carried out in Switzerland to obtain approval for operation in Switzerland. From December 2017 six class 412 trains will be in use on the Hamburg to Munich route replacing the original ICE 1 trains.