GERMAN Rail (DB) has announced it is working with technical universities in Chemnitz and Dresden to develop bi-mode (diesel and electric) trains with lithium-ion battery storage. Between 2017 and 2021 DB intends to convert 13 existing Siemens class 642 Desiro Classic DMUs to hybrid bi-mode configuration. 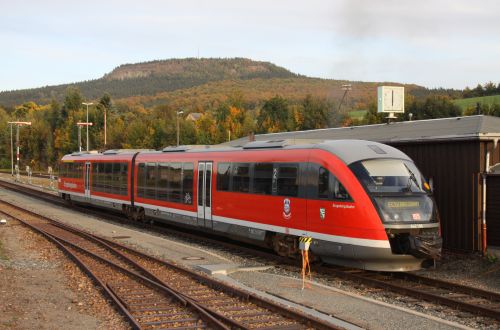 The first train should be ready for testing by September 2017 with Federal Railway Authority (EBA) approval envisaged by early 2018. The trains will be used by DB RegioNetz Verkehrs (Erzgebirgsbahn) on the Erzgebirge Diesel Network in Saxony.

The rebuild programme - named EcoTrain by DB - will cost €15m, with DB providing two thirds of the budget and the balance coming from the German federal government.

DB envisages the rebuilt trains will operate as EMUs most of the time, even though they will operate largely on non-electrified lines, drawing power either from the overhead electrification or the batteries.

DB says it will be possible to charge the batteries using shore supply cables when the train is not in use, and through regenerative braking when in operation.

If the Erzgebirge trial is successful DB may consider offering rebuilt class 642 trains in future tenders for regional contracts elsewhere in Germany.