THE FRENCH region of Aquitaine marked the entry into service of its new fleet of class Z 55500 Regio 2N double-deck EMUs on September 15, when regional president Mr Alain Rousset officially launched the fleet in a ceremony at Bordeaux Saint Jean station before joining the inaugural service to Arcachon. 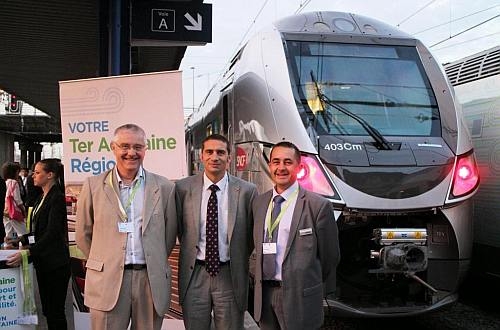 Six regions including Aquitaine, Brittany, Centre, Nord-Pas de Calais, Provence-Alpes-Côte d'Azur, and Rhône-Alpes placed an initial order with Bombardier for 129 Regio 2N sets in 2010. Aquitaine has ordered 24 trains, all of which are due to enter service by mid-2016.

The first trains are being used on services from Bordeaux to Arcachon and Agen, but as further sets are delivered they will also be deployed on the Bordeaux – Dax – Hendaye/Pau route. Each train accommodates 330 passengers, double the capacity of the AGC EMUs they have replaced on the Arcachon and Agen services.

The Aquitaine government says additional capacity is needed to cope with increasing passenger numbers on TER services in the region, which have seen a 59% increase in ridership since 2002.

So far nine regions have ordered a total of 197 Regio 2N sets in varying configurations and if all options are exercised, Bombardier could eventually supply 860 trains to the French regions. The trains are being assembled by Bombardier at its Crespin plant in northeast France.

Bombardier will display a Regio 2N set in the outdoor area at Innotrans in Berlin on September 23-26.