DANISH State Railways (DSB) released the latest independent assessment of its AnsaldoBreda IC4 DMUs on December 5, detailing the current status of the troubled fleet and the measures necessary to ensure the trains operate reliably. 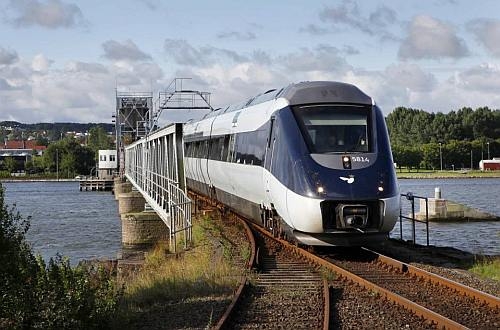 The assessment, which focussed solely on the IC4s, was carried out by Prose, Switzerland, in cooperation with Swiss Federal Railways (SBB) and Swiss engineering consultancy Enotrac between late August and the start of December. The assessment team carried out 47 group interviews, meetings and inspection tours and studied around 400 documents.

DSB ordered 82 four-car IC4 and 23 IC2 two-car sets from the Italian manufacturer in 2000 and the first trains were due to enter service in 2003, but the trains have been beset by technical problems and introduction has been heavily delayed.

By the end of October the IC4 fleet had covered just 10.8 million-km in service, 30% of it this year, and four of the trains still have 0km on the clock. 80% of the total fleet mileage has been covered by just 31 trains and 30 trains have covered less than 1% of the total. DSB's current availability requirement is for 32 sets twice a day.

According to DSB's current deployment plan, only 74 of the 82 sets will now be required for service and five of the trains will be cannibalised for spare parts. So far 67 sets have been approved for operation, but around half of these are held in an operational reserve pool.

The operation of trains in multiple is currently banned and maximum speed is restricted to 169km/h, and 140km/h during the leaf-fall season, due to issues with the braking system. Earlier this year DSB commissioned an investigation by DB Systemtechnik following the discovery of axlebox cracks, one of the contributing factors in the decision to launch the Prose study.

Prose notes that a large proportion of the fleet has passed through various rebuild/modification programmes and the rollout of this process is "under control." So far 71 trains have been subject to between 75 and 103 separate modifications. However, continuing poor reliability and the need for additional inspections means maintenance efficiency is low, leading to high operating costs.

The report concludes that DSB's target of achieving 20,000km Mean Distance Between Failures causing a delay of five minutes or less (MDBF) by 2019 is feasible, and the operator has the necessary infrastructure and procedures in place to achieve this. There is still some way to go – baseline average MDBF for January – August was 5949km, against a goal in DSB's deployment plan of 7260km by January and 9077km by August. However the report notes that availability reached 13,687km MDBF in November, showing a "positive tendency,"

A pool of five IC4s will be dedicated to long-distance services for mileage accumulation, which will enable DSB to gain experience of how the remainder of the fleet might perform at a later stage.

At present reliability has a lower priority than availability and functionality and the report stresses that DSB needs to maintain a clear focus on availability at depots, as well as the necessary staffing. It recommends increasing the team of experienced engineers to improve failure analysis and define recovery measures, adding at least 12 full-time staff over the next three years at a cost of around DKr 43.2m ($US 7.1m).

On the depot side, Prose recommends allocating at least 40 additional full-time staff to IC4 maintenance for the next two years at a cost of around DKr 37.1m, which it is argued would speed up the implementation of the modification programme.

A task force will also look at power pack configuration and cross-functional teams will be set up to improve the reporting of failure messages. Prose says it has found signs of weaknesses in the current power pack arrangement and axlebox housings that could lead to major design changes.

Another issue explored in the report is the potential long-term deployment of the fleet. Since IC4 was procured, and partly as a consequence of the problems with the new trains, a significant proportion of the Danish main line network has been earmarked for electrification, which will substantially reduce the requirement for long-distance DMUs by the mid-2020s. Redeployment of IC4s on regional and inter-regional services is therefore being explored by DSB.

This means that economic viability of remediation work depends on the suitability of the fleet for duties other than those they were designed for and the report suggests that the trains should be limited to interregional services. The axleload of the IC4 is 3.3 tonnes higher than the alternative IC3 DMUs, which have a maximum axleload of 21.24 tonnes. Furthermore it also argues the increased acceleration and braking pattern of regional operation will place higher demands on propulsion, braking and door systems, resulting in higher wear on components such as brake pads, higher fuel consumption, and lower MDBF figures.