TRANSPORT Infrastructure Ireland (TII) signed a €36.5m contract with Alstom on November 17 for seven additional Citadis low-floor LRVs for Dublin's Luas light rail network, which will expand the existing fleet of 66 vehicles in preparation for the opening of the Cross City Line in 2017. 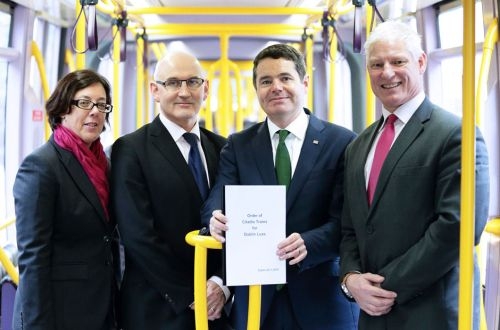 At 54.9m in length, the nine-section bidirectional vehicles will be 11.6m longer than the Citadis vehicles currently in operation on the Green Line, accommodating 379 passengers compared with 319 at present. The vehicles will be assembled at Alstom's La Rochelle plant in France.

Platforms on the Green Line between St Stephen's Green and Sandyford will be lengthened before the longer vehicles are delivered.

The 5.9km 13-station Cross City Line will run north from the existing Green Line terminus at St Stephen's Green, crossing the Red Line at the junction of O'Connel Street Upper and Abbey Street and serving the new Dublin Institute of Technology campus at Grangegorman before terminating at an interchange with Irish Rail's Broombridge station. Commercial services will begin on the €368m line at the end of 2017, increasing annual ridership on the Luas network by around 10 million passengers per year.