AFTER years of delays, the Dutch Environmental and Transport Inspectorate (ILT) finally granted authorisation to place into service for the AnsaldoBreda V250 'Fyra' high-speed train fleet on July 6. 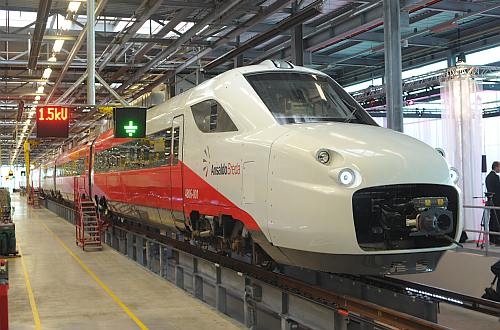 The ILT has granted the approval to the notified body, Lloyd's Register Rail, which is managing the certification process on behalf of operator NS Hispeed.

The authorisation, which allows the eight-car 250km/h multi-system emus to operate in revenue service, currently applies only to the Dutch network. Approval for use in Belgium is also due to be granted by the end of the month, and closely follows the certification process in the Netherlands, making use of data and information gathered during trials on the Dutch network.

The approval of the V250s is a milestone for high-speed operation between the Netherlands and Belgium. However, because they have not yet been entered into the national vehicle register, the V250s will not carry passengers until September 10, when they are expected to begin hourly test operations on timetabled services between Amsterdam and Rotterdam via HSL South.

There are currently nine V250s in the Netherlands, five of which have been officially delivered and handed over to NS Hispeed. The remainder of the fleet is at AnsaldoBreda's Pistoia plant in Italy.

The V250s are equipped with ETCS Level 2 for on HSL South together with the Belgian Memor and Dutch ATB systems for operation on conventional lines. The trains will be maintained at in Amsterdam, where NS subsidiary has constructed a dedicated depot to deal with high speed rolling stock. In total 19 V250 train sets have been ordered, of which 16 are for NS Hispeed and three for Belgian National Railways (SNCB). All trains will operate in a single pool, and will be maintained by NS subsidiary Nedtrain at its purpose-built Watergraafsmeer depot near Amsterdam.

Both Dutch and Belgian rail safety authorities are reportedly seeking to establish a joint control and inspection regime for the new trains when they have entered service.

The trains were ordered as long ago as 2004, but their entry into service has been repeatedly delayed by technical problems and political wrangling over the ETCS Level 2 specification for HSL South.