URAL Locomotives presented the last of 33 ES2G Lastochka EMUs for the Moscow Ring Railway to Central Suburban Passenger Company at Podmoskovnaya depot in Moscow on August 22. 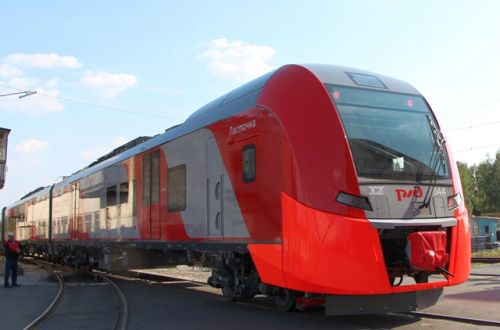 Currently used exclusively by freight trains, the 54km Moscow Ring Railway has been upgraded for suburban passenger services. Work began on the project in 2013 and involved electrification of the entire line at 3kV dc, construction of new stations, addition of a third track on the northern section of the line, and construction of a new depot at Podmoskovnaya. Testing using the ES2G fleet is now underway on the line and passenger services are due to begin operating on September 10.

The Ural Locomotives joint venture of Siemens and Sinara began assembling Lastochkas at its Verkhnaya Pyshma plant near Yekaterinburg in 2014 and proportion of local content has increased over the last two years, reaching 64.2% in the batch for the Moscow Ring Railway. Ural Locomotives says localisation will increase to 80% with future production batches.