BRITAIN's secretary of state of transport Mr Patrick McLoughlin announced on April 16 that the Department for Transport (DfT) has reached financial close on a £2.7bn contract for a fleet of 65 225km/h Super Express Trains (SETs) for long-distance services on the East Coast Main Line (ECML). 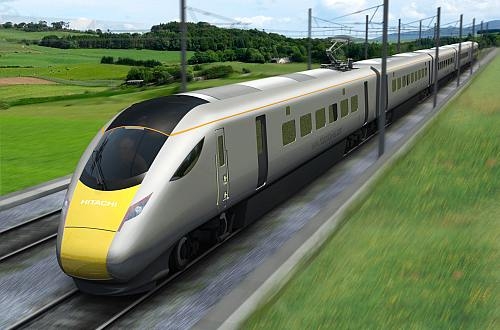 The fleet has been ordered from Agility Trains, a consortium of Hitachi Rail Europe and John Laing as part of the DfT's Inter-City Express Programme (IEP), which also includes 57 trains for the Great Western Main Line. Under the fixed-price train provision agreement between DfT and Agility, Hitachi will maintain the fleet for 27.5 years.

The East Coast contract covers a total of 497 vehicles, which will be assembled at Hitachi's new Newton Aycliffe plant in northeast England. The initial £1.5bn order comprises 12 five-car electric trains, 10 five-car bi-mode trains, and 13 nine-car bi-mode class 800 trains, which will enter service from September 2018 on the route from London to Leeds, Newcastle and Edinburgh.

The DfT announced last July that it would exercise an option worth £1.2bn for 30 additional nine-car electric SETs (class 801), which will enter service in 2019, replacing the fleet of class 91 locomotives and Mk4 coaches built in the late 1980s. The entire fleet is due to be delivered by February 2020.

The East Coast SET fleet will be maintained at a purpose-built depot at Doncaster together with existing facilities in London, Newcastle, and Edinburgh, which will be adapted to service the new trains.

The order is being financed by Agility through a consortium of banks including the European Investment Bank, the Japan Bank for International Cooperation, Bank of Tokyo Mitsubishi, Development Bank of Japan, HSBC, Lloyds, Mitsubishi Trust, Mizuho, Sumitomo Mitsui Banking Corporation, Société Générale, and Credit Agricole.