IRJ at Expo Ferroviaria, Milan: The first of 12 Evo Pendolino trains being built by Alstom for Italian open-access high-speed operator NTV was presented to the company’s president Mr Luca Cordell Montezemelo and CEO Mr Flavio Cattaneo at the Expo Ferroviaria exhibition in Milan on October 3. 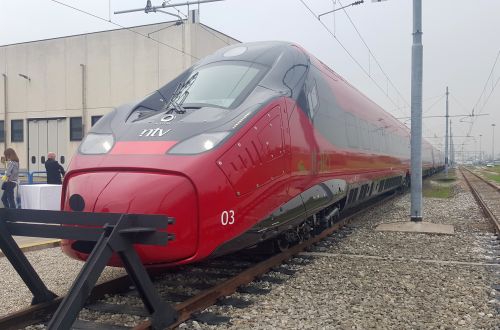 The non-tilting train is currently going through the certification process and the first four sets are due to enter service in December with the remaining trains following in 2018. The trains have a maximum speed of 250km/h, compared with 300km/h for NTV's existing fleet of 25 AGV trains, which were also supplied by Alstom.

Each seven-car train is 187m long and will accommodate 480 passengers in three classes: Club, Prima and Smart. All seats have USB sockets.

The new trains will expand NTV's fleet by 50% and will enable it to increase the number of services operating between Rome and Milan from 40 to 50 per day and the number of non-stop services from 15 to 20 per day.

NTV also plans to double the frequency of Rome - Venice services to 16 trains per day and introduce new routes such as Turin - Milan - Venice in 2018.