SIEMENS has rolled out the first Desiro ML train for Austrian Federal Railways (ÖBB) which has branded the EMU fleet Cityjet. 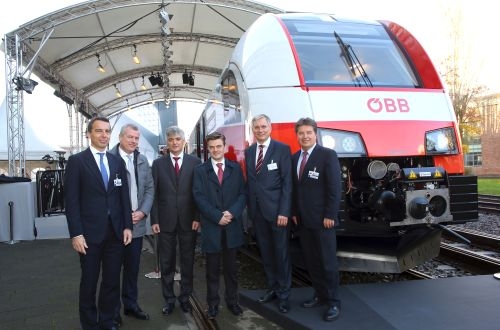 The ceremony took place on November 10 at the Siemens plant in Krefeld, Germany, in the presence of Austria's transport minister Mr Alois Stöger and ÖBB CEO Mr Christian Kern. The first train will now undergo intensive testing at the Wegberg-Wildenrath test track in northern Germany, before being transferred to Austria in March 2015 for approval. The first sets will enter service with ÖBB in autumn 2015.

All Cityjet EMUs will be prepared for installation of ETCS equipment while some class 4746 trains will be fitted with ETCS from the outset. These will be used on semi-fast services between Vienna and St Pölten via the new high-speed line. The first 21 sets will be built at Krefeld while the remaining trains will be sent to ÖBB's Jedlersdorf works for final assembly. Delivery should be completed in 2018.

Kern said that ÖBB will most likely exercise its option for 99 additional Cityjet trains. ÖBB also announced that it plans to issue a tender for new inter-city trains in 2016 for delivery in 2020. They would replace locomotive-hauled trains.