HITACHI has started production at its Kasado facility in Japan of two test trains as part of a fleet of 19 five-car electro-diesel trains which it will build for First TransPennine Express in Britain under a deal financed by Angel Trains. 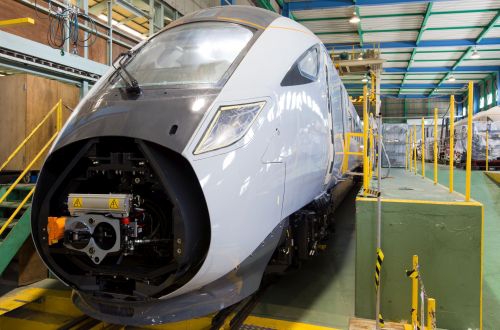 The two class 802 trains will arrive in Britain next year for testing. The remaining trains will be assembled at Hitachi Rail Europe’s facility at Newton Aycliffe in northeast England, and the fleet is due to enter service between Manchester, Leeds, Newcastle and Edinburgh in 2019.

The trains will be fitted with MTU diesel engines supplied by Rolls-Royce for operation on non-electrified lines. They will have a maximum speed of 200km/h in diesel mode and 225km/h in electric mode, although the maximum speed on the British conventional network is 200km/h.

Wi-Fi will be provided in both standard and first-class together with a complimentary on-board entertainment system called Exstream which will allow passengers to stream films and TV programmes.

Hitachi will maintain the fleet at its new £80m depot in Doncaster.