THE first modernised Netherlands Railways (NS) Sprinter Light Train (SLT) EMU, and the first of the fleet to be equipped with a toilet, returned to service on August 9. 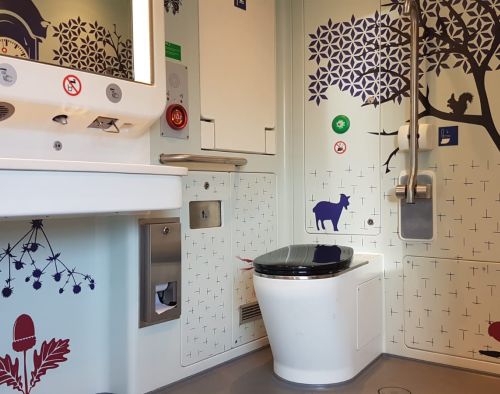 The upgraded trains are compliant with the Technical Specification for Interoperability for Persons With Reduced Mobility (PRM-TSI). Enhancements include retractable flaps below the passenger doors to bridge the gap between train and platform, two marked wheelchair bays with call buttons, and an accessible toilet. There is also tactile signage to aid partially-sighted or blind passengers.

The new interior design has been developed and tested in consultation with groups for people with reduced mobility.

In addition to these features, upholstery has been replaced by NS train maintenance and refurbishment subsidiary NedTrain, and each train will be reupholstered in a single day when the refurbishment programme is in full swing. The new seat coverings are similar to those used on NS’ fleet of Stadler Flirt 3 EMUs.

Two prototype trains are now in operation and a third is due to enter service at the end of the year. Feedback from the operation of these trains will be used to finalise the specification for the remainder of the fleet, which will be upgraded from early 2019 onwards.

The refurbishment is being carried out by Bombardier and Siemens, the original suppliers of the SLT fleet, under a contract awarded in 2016.

The entire fleet of 69 four-car and 62 six-car SLT sets will be modernised by 2021, with the work being carried out at the former Talbot rolling stock plant in Aachen, Germany. Two trains will be out of service for refurbishment at any given time during the programme.