THE first of 12 Moderus Beta trams being supplied by Modertrans, Poland, for Silesian Tramways is undergoing tests at the manufacturer's plant in Poznan in preparation for the introduction of the fleet on the standard-gauge network around Katowice this autumn. 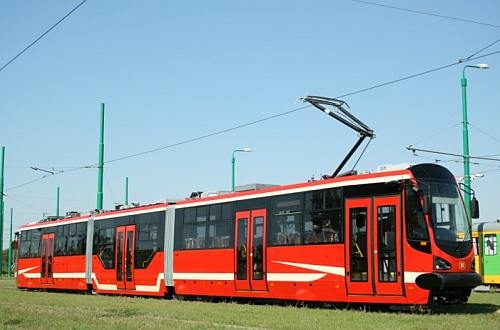 The 660V dc three-section MF 16 AC BD vehicle has eight ac traction motors providing a nominal output of 400kW. The 18m-long bidirectional LRV is 26% low-floor with an entry floor height of 350mm and accommodates up to 198 passengers, 46 of them seated.

Production began last December and the first vehicles are due for delivery later this month, with the final units scheduled to arrive in Silesia by October.

The Zlotys 47.4m ($US 12.5m) order is being co-financed by the European Union Cohesion Fund Infrastructure and Environment Programme, and is part of a broader project to modernise Silesian Tramways' 196km 30-line network, which serves 13 towns around Katowice.