THE first Class 195 Civity DMU for Arriva Trains Northern has left CAF’s plant at Irun in northern Spain bound for the VUZ test track at Velim, where it will undergo dynamic testing prior to delivery to Britain. 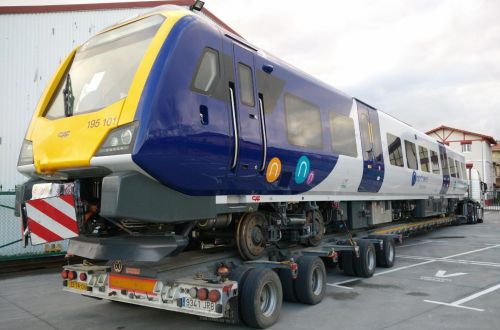 Northern placed a £492m order in January 2016 for 25 two-car and 30 three-car class 195 sets, together with 31 three-car and 12 four-car EMUs (class 331). Financing for the order is being provided by Eversholt Rail.
The 160km/h class 195 is equipped with MTU power packs incorporating 390kW Daimler engines and hydraulic-mechanical transmissions supplied by ZF.

A video of the first train moving under its own power at Irun can be viewed here.