THE first Stadler Flirt 3 EMUs for Netherlands Railways (NS) arrived in the Netherlands on March 29, when three sets were moved by rail from the Dutch-German border station at Herzogenrath to Maastricht. 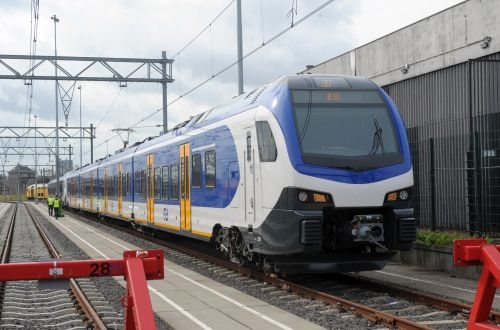 NS placed a €280m order with Stadler for 58 of the 160km/h regional EMUs in April 2014, less than six months after it awarded CAF a €510m contract for 118 Civity regional EMUs. NS is currently facing a severe shortfall in fleet capacity due to rapidly-rising passenger numbers and as CAF was unable to deliver the Civitys before mid-2018, NS decided to order additional trains from Stadler without issuing a tender in order to meet short-term demand.

The Flirt order comprises 33 three-car and 25 four-car trains. The 1.5kV dc articulated trains are being assembled at Stadler's palnt in Siedlce, Poland and deliveries were scheduled to start in the first half of this year with the first sets entering passenger service in December.

The trains will be maintained by Nedtrain at its Maastricht depot, which has been upgraded in readiness for the arrival of the new EMUs.

The NS trains are not the first Flirt 3 sets to arrive in the Netherlands. In November 2015 Stadler delivered the first of a fleet of two-car trains, which will be used by NS subsidiary Abellio on Gouda - Alphen-aan-den-Rijn R-Net services. These trains are currently undergoing certification and are due to enter passenger service in December.