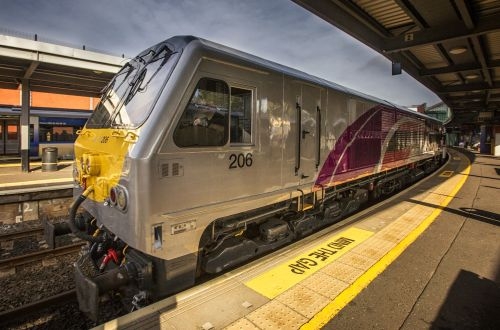 The £12.2m project, which will be completed by the end of the year, is being funded through the European Union's InterReg IVA programme, with support from Ireland's Department for Regional Development and the Department of Transport, Tourism and Sport.

The work on the coaches, which were built by De Dietrich, France, and introduced in 1997, involves overhauling and recovering seats, replacing tables and carpets, refitting toilets, and redesigning the catering cars. Several new systems have been installed including audio and visual passenger information, passenger alarms, public address, eco lighting, a train management system, CCTV, and from next year an electronic seat reservation system.

"Customers will first notice the train's striking modern new look with a stylish purple, red and grey livery, says Mr Chris Conway, Translink Group Chief Executive. "Stepping on board, the transformation is incredible with vibrant, eye-catching new colour schemes."
Translink is also taking the opportunity to improve onboard catering with a dining car offering table service, and an at-seat meal service for passengers travelling Enterprise Plus.

In addition, by the end of the year Irish Rail (IE) will complete the refurbishment of Boyne viaduct at Drogheda on the Belfast – Dublin main line, to which the EU has contributed more than €6m.

Interior of a refurbished Enterprise Plus coach.