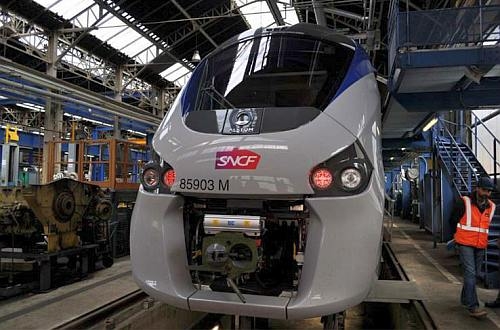 Upper Normandy is investing €80m in the fleet of bi-mode dual-voltage trains, which are equipped to operate under 25kV ac and 1.5kV dc electrification systems. Each 72m-long four-car set will seat 218 passengers, including 26 passengers with reduced mobility, with space for six bicycles.

The first trains will enter service in September on the Rouen - Dieppe line and the remainder of the fleet will be delivered by September 2016.

In preparation for the introduction of the new trains the region has spent €2.5m adapting Sotteville depot, extending the main shed and installing high-level walkways for roof-level access.

So far Alstom has received orders for a total of 192 Régiolis trains of varying configurations from 12 French regions and the fleet has already covered more than three million kilometres in commercial service.