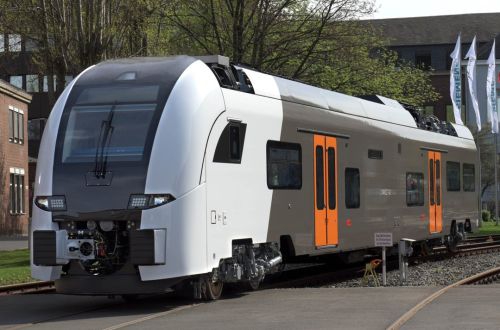 Siemens was awarded a €1.7bn contract by Rhine-Ruhr Transport Authority (VRR) in March 2015 to supply 82 of the four-car EMUs and maintain the fleet for 32 years.

The Desiro HC trains combine single-deck driving cars with double-deck intermediate vehicles. According to Siemens, the 105m-long RRX Desiro HC set with two double-deck cars will seat up to 420 passengers.

The five-line RRX network will introduce a consistently high-quality fast regional rail service to Germany's most densely-populated region, with trains running at 15-minute intervals on the core Dortmund - Cologne line at a maximum speed of 160km/h.

Delivery of the Desiro HC fleet is due to start next year and the trains will enter service when the RRX Concession begins in December 2018.

According to the tender, 71 trains will be required to operate the full timetable with the remaining sets covering maintenance.