THE first of a fleet of class 700 Desiro City trains being built by Siemens at its Krefeld plant in Germany for the expanded cross-London Thameslink service has arrived at the new Three Bridges depot near Gatwick Airport. 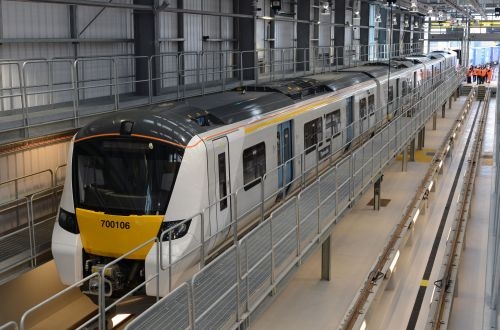 Siemens and Govia Thamselink Railway will now start testing the train to prepare for the fleet's entry into service initially on the Bedford – London – Gatwick Airport - Brighton corridor in spring next year.

When reconstruction of London Bridge station and other track improvement works have been completed in 2018, the Thameslink network will be expanded to include Cambridge and Peterborough, as well as other destinations in Kent and Sussex.

The trains are being supplied under a £1.6bn PPP finance, construction and maintenance contract between the Department for Transport and the Cross London Trains consortium of which Siemens is a member.

Interior of a standard-class Thameslink coach.