THE first of four 950mm-gauge Vulcano regional DMUs being supplied to the Circumetnea Railway (FCE) by Newag, Poland, arrived in Sicily on December 1. 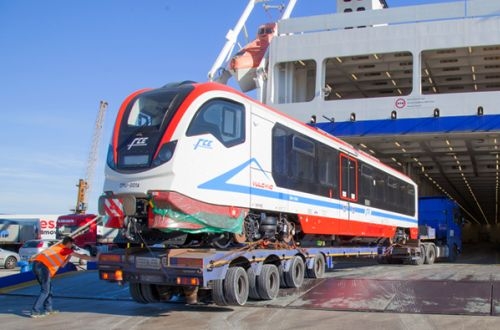 The €14.8m contract was signed on December 3 2013 at the Ministry of Infrastructure and Transport in Rome and represents Newag's first rolling stock order outside Poland. FCE is directly controlled by the ministry's Public Transport Department.

The new trains will operate on the 111km line from Catania to Riposto, which serves towns surrounding Mount Etna, Europe's most active volcano.

The story of new rolling stock for FCE has been a tumultuous one. In 2010, two decades after the last acquisition of DMUs for this line, RSI-Costa Sistemi Ferroviari (former Costamasnaga) was awarded a contract to supply eight new DMUs. Unfortunately the company subsequently filed for insolvency, leading the Ministry of Transport to sign a new contract with Newag for four trains with an option for six additional sets.

Each two-car train will seat 100 passengers and the air-conditioned DMUs will be accessible for passengers with reduced mobility. The 100km/h trains are also configured to enable multiple operation.