THE first of 10 Kiss 2 double-deck EMUs for Austrian long-distance open-access operator Westbahn was moved from Stadler’s plant at Altenrhein in the Swiss canton of St Gallen to the company’s commissioning centre at nearby Erlen on August 12. 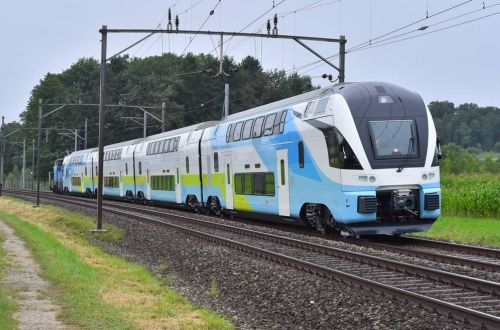 Westbahn placed a €180m order in May 2015 for nine four-car class 4110 trains and one six-car lass 4010 set. The nine remaining sets are under construction and deliveries are due to be completed by mid-2017.

The Kiss 2 trains features a number of improvements over the six-car first-generation Kiss sets already in service with Westbahn, including single-leaf sliding doors, better acceleration, and upgraded bogies for smoother riding. The interior has also been improved, with 2+1 seating in WestPlus accommodation on the upper deck and a WestCafé with automatic vending machines for snacks and two coffee machines.

Westbahn says the new trains will enter service from the middle of next year and from December 2017 the fleet will be deployed on an additional hourly Vienna Main Station - Salzburg fast service which will only call at Linz.

With a planned journey time of 2h 10min this will be faster than Austrian Federal Railways' (ÖBB) fastest competing Railjet service, which completes the 312km trip in 2h 22m. Alternate fast Westbahn services will be extended to provide a two-hourly service to Innsbruck.