Loadings on newly relaunched domestic overnight trains are around 65%, rising to 80% during peak periods. 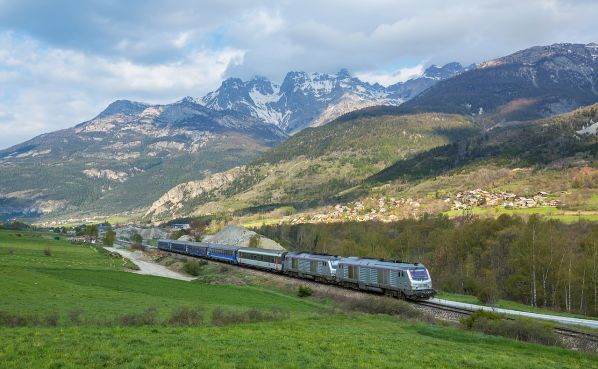 The Paris – Briançon service is one of only two remaining overnight trains in France.
Photo Credit: David Gubler

FRENCH transport minister, Mr Jean-Baptiste Djebbari, has announced further details of a planned Call for Expressions of Interest (CEI) to operate new international overnight services from France, after a study carried out by the government identified more than a dozen possible new routes.

The plans were announced on February 23 at the start of a conference on the Renewal of Night Trains in Europe, organised by France as part of its presidency of the EU.

Mr Marc Papinutti, director general of the Ministry of Infrastructure, Transport and the Sea (DGITM), told IRJ that the terms of the CIE would not be drawn up too tightly to allow a wide range of proposals.

At least two companies have already put forward their own proposals for improving cross-border overnight services from France. Midnight Trains envisages a network centred on Paris. The head of Austrian Federal Railways’ (ÖBB) long-distance services, Mr Kurt Bauer, told the conference that the recently-reintroduced Vienna - Paris Nightjet service was fully booked weeks in advance and would be increased from thrice-weekly to daily and doubled in length subject to rolling stock availability.

There is similarly strong demand on France’s recently reopened routes where the occupancy rate is 65%, rising to 80% during peak periods.

French National Railways (SNCF) only has 122 overnight coaches, most of which were saved from the scrapyard at the last moment following the government’s U-turn on the provision of night train services. Three more coaches will be added to the Paris - Toulouse service this year to support an extension to  Aurillac via Brive, but no further Corail stock is available apart from day coaches which are too expensive to convert.

The ministry expects to invest €800m on overnight services between 2026 and 2030. SNCF is advancing plans to purchase 300 new night coaches, with a call for tenders for the fleet expected shortly. Rolling stock leasing company Alpha Trains showed strong interest during the conference in purchasing the trains, while Siemens, CAF and Alstom all said they were preparing to bid to supply them.

There is strong pressure to continue to expand the overnight network once already-planned routes are implemented.

DGITM director of transport services, Mr Alexis Vuillemin, told IRJ that the ministry believes the government’s current level of subsidy for domestic overnight services should be maintained as the network grows. Vuillemin cites the economies of scale and improvements in productivity available through multi-tasking, such as reducing the number of staff required for coupling and uncoupling.

The ministry will shortly announce the end of its night train contract with SNCF ahead of a new tender for existing and new services.

During the conference, the president of Italian infrastructure manager RFI, Ms Anna Masutti, said there was a growing emphasis on strengthening the rail network to support the operation of night trains, and called for air and rail to collaborate on modal integration.

“The modal shift from air to rail on short-haul routes could free up time slots for long-haul flights, with improved productivity for airports and airlines,” she says. “In addition, the expansion of rail transport in connection with airports can improve their accessibility for long-haul travel in an efficient and environmentally sustainable way. The challenge is ultimately to find areas of interest for carriers and areas of possible cooperation with clear regulatory support. These actions can help to further promote the development of night train services throughout Europe.”

A detailed look at the rise of night trains in Europe was published in the May edition of IRJ. Digital subscribers can read it here.