THE president of the French region of Grand Est Mr Jean Rottner, regional vice-president for mobility, infrastructure and transport Mr David Valence and Mr Vincent Téton, regional director for SNCF Mobility announced during a visit to Alstom’s Reichshoffen plant on November 17 that the region will place two orders with a total value of €250m for 21 regional and long-distance trains, which will be delivered between 2018 and 2023. 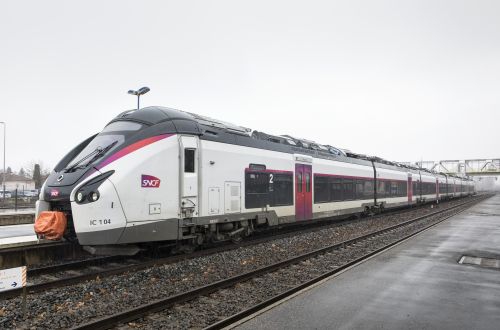 The first order is worth €80m and comprises six Coradia Liner V160 electro-diesel multiple units for use on Paris - Troyes - Belfort inter-city services, which will come under regional control from January 1 2018.

Alstom’s Reichshoffen plant is currently supplying 34 Coradia Liner trains to SNCF, including 19 sets for Paris Belfort services. The first of the class B85000 trains entered service on the route in February this year, replacing locomotive-hauled trains.

Grand Est is the first French region to order the Coradia Liner.

The regional assembly will also vote in the first half of next year on a proposal to order 15 Régiolis multiple units for cross-border services between France and Germany.

To support the introduction of new rolling stock, the region has allocated €5.2m to upgrade maintenance facilities at Jarville, Strasbourg, Chalindrey and Troyes.

• Grand Est has agreed to contribute €5.1m towards a €27.5m project to equip 25 TER 2N NG double-deck EMUs used on cross-border services to Luxembourg with ETCS Level 2 Baseline 3. The European Union will also provide a €5.1m grant through the Innovation and Network Executive Agency (INEA). Luxembourg Railways (CFL) plans to decommission its class B Memor II signalling system in January 2020 following the completion of the national ERTMS rollout.