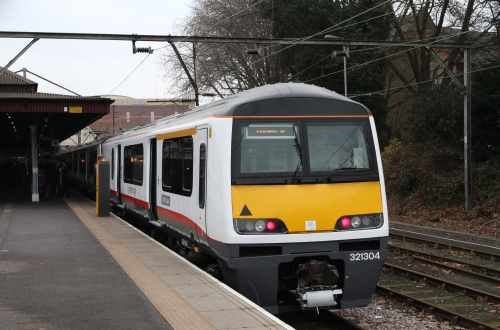 The first train has been fully internally and externally refurbished but is not using the new traction equipment package, which was presented to stakeholders and the media between London Liverpool Street and Ipswich.

The class 321s were built by BREL at York for the former British Rail between 1988 and 1990, and was initially used on both Great Eastern/Anglia (class 321/3) and commuter services from London Euston (class 321/4). The vast majority of units are now used by Greater Anglia for services between London, Southend, Southminster, Braintree, Clacton, Harwich and Ipswich (with peak hour trains to Norwich).

The prototype class 321 "Renatus" unit was put into service in 2013 and has operated over 12,390km. Over 2500 feedback comments from users have been received, some of which have been used to finalise the specification for the production batch of trains.

The production Renatus programme will cover units the first 30 class 321 sets, built in 1988-89. Unlike the prototype, the production trains will have a completely new traction system plus new interiors including air-conditioning, power points at every seat, passenger Wi-Fi, LED interior lighting, new seats and passenger reduced mobility accessible toilets.

The new traction package will be installed by Vossloh Kiepe using space at the Wolverton works site leased especially for the contract. The new traction package replaces the original Brush dc traction motors and comprises new 300kW ac traction motors made by Traktionssysteme Austria which are also being fitted to the South West Trains’ class 455 EMUs. A new bigger transformer to support regenerative braking and new auxiliary power systems are also being fitted along with new traction convertors. The new traction system produces a 12% increase in available power - more than compensating for the additional power required for air-conditioning, or in the future ETCS signalling.

Vossloh and Eversholt believe the trains will be much cheaper to operate as regenerative braking will reduce brake pad consumption by around a third and enable bogie overhauls to be undertaken every 965,606km rather than every 804,672km at present. Vossloh Kiepe will release the first re-tractioned unit in mid-January and it should be in passenger service by February. The programme will then increase with all 29 other units re-tractioned by early 2018.

The trains will be refurbished as they need heavy overhauls and will either receive the new interior first undertaken by Wabtec at Doncaster or the new traction package first, making the visit to Wabtec later. The interior and bodyshell refurbishment programme will be completed several months after the re-tractioning programme in July 2018.

In the long-term, Eversholt sees a future for the refurbished trains by leaving them to other train operating companies once Greater Anglia's fleet of new EMUs enters service. The new traction equipment is designed for a 30-year life while Eversholt believes the trains can be used commercially until at least 2032. Currently there are no plans to fully refurbish any of the remaining class 321 EMUs.